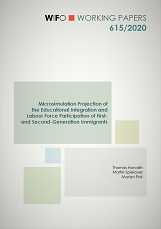 In this paper, we present the results of a dynamic microsimulation analysis that examines how changes in the educational integration of first- and second-generation immigrants would af-fect the future size of the Austrian labour force. Due to population ageing and migration, the number and proportion of people with a migration background will increase significantly in the coming decades. Differences in educational careers, as well as differences in labour mar-ket participation between the second generation of migrants with EU/EFTA backgrounds and people without a migration background, would have only a minor impact on future labour force participation dynamics. In contrast, closing education and labour force participation gaps for the second generation of migrants with a third country background would lead to a significant increase in the size and qualification structure of the working population.