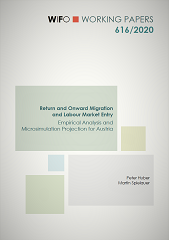 This paper examines return and onward migration of immigrants to Austria, taking into account immigration type, country of origin, and employment outcomes. The analysis is based on longitudinal administrative records of the Austrian Social Security Database of immigrants who entered Austria between 2009 and 2017. It is the first such study for Austria. We find that about 25% of immigrants leave Austria within less than a year of their arrival and 50% within 5.5 years. Return and onward migration is closely correlated with immigration type and origin. Refugees have a very low likelihood to leave Austria, whereas labour migrants a substantially higher one. Women are more likely to stay than men, and immigrants from Turkey have the lowest return probabilities among all origin groups. Emigration is also closely correlated with labour market success, the likelihood to stay depending on the speed of labour market integration. The consequence of these patterns is that the composition of the stock of immigrants living in Austria differs from the structure of new immigrants entering the country. We apply dynamic microsimulation to project the size and structure of the first-generation immigrant population in Austria as well as its labour market integration up to 2060. Our simulation results suggest that eventually, over 90% of the resident immigrant population attains at least some labour market experience and that the differences in return and onward migration across immigrant groups work to shift the structure of the immigrant population in the direction of third-country nationals.